The original county seat for Johnson County was Spadra, located on the Arkansas River. Spadra was a hub of activity because it was the location of an Indian trading facility, a trading post authorized by the government which emphasized relationships between settlers and Native American tribes. While Spadra held a great geographical position regarding both the fertile land surrounding the river and the water transportation that came with being on the river, the county seat was eventually moved to the quickly growing Clarksville in 1836.

Industries that Build the County 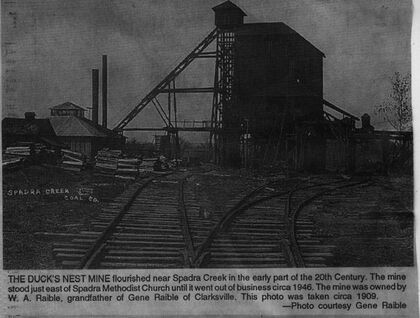 Johnson county has gone through a number of different agricultural, mining, and manufacturing industries that lead to the county’s growth and prosperity. Early settlers began with tobacco production, but this eventually transitioned into cotton. Coal was discovered in the Spadra area by the time the 1840’s rolled around, but the industry would only prosper with the advent of railroads. Coal mining provided a great many jobs, leading people to come from all of the world and immense growth of the county.

​Fruit crops such as apples, pears, and especially peaches made their way to the forefront when the University of Arkansas in Fayetteville opened a fruit-specialized agricultural branch substation in the county. Poultry also went on the rise in 1952 when a poultry processing plant opened and became one of the largest employers in the county. Finally, Johnson county is a hub of transportation with the Arkansas River, Interstate 40, numerous rail lines, and an airport all making their way through the county. Today, Tyson Foods, a poultry processing operation, has brought economic prosperity to the county in addition to the multitude of diversified agricultural producers (peaches, cattle, vegetables, soybeans, grains). Walmart Distribution Center is another empire that has brought success to the county; the distribution center leading the nation and even bringing home "Grocery Center Distribution of the Year" for the past three years. 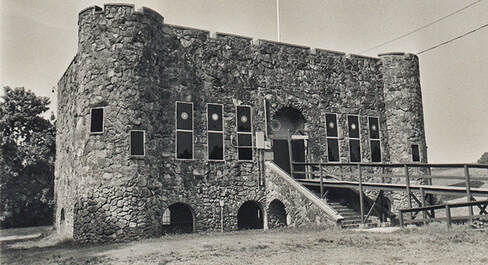 Bunch-Walton Post 22 American Legion
A two-story, native-stone structure sitting on a raised foundation resides in the
county seat of Clarksville. The Normanesque appearance with castellated turrets makes the Bunch-Walton Post 22 American Legion Hut yet another architecturally distinct building that made its way onto the National Register of Historic Places on January 24, 2007.

The style is thought to be reminiscent of the architecture of Europe during
World War I. In February of 1919, the Lee Bunch Post 22 was formed and
named in commemoration of Lee Bunch, the first soldier to die in World War I
that hailed from Johnson County. The group ​met anywhere possible locally, until
the Civil Works Administration (a federal relief agency during the Great Depression) approved the construction of a community building in Clarksville in 1934

On Memorial Day of that year, the building was dedicated by the Arkansas Department commander of the American Legion, Charles Q. Kelley. Following World War II, the chapter was renamed to commemorate another honorable soul lost to the war. Captain Raymond Charles Walton was the co-pilot of a bomber shot down over Italy in 1943 and the first casualty of WWII from Johnson County. Although faced with many obstacles, from vandalism to tornadoes and flooding, the building has survived, representing the strength and beauty of Johnson County.

The Union School is located 11 miles from Hagarville and is yet another Johnson County place located on the National Register of Historic Places. The school house served the Mt. Levi community in the Ozark National Forest, in a county where education in rural areas was valued. The Union School was built in 1929 by Willis Warren and Orville Skaggs (among other carpenters and craftsmen) to replace the original school house built in the same spot that had burned down the previous year. The Union School has an exterior and interior finish of wood with a solid foundation composed of stone. The traditional two story school house also served Mt. Levi by providing as a community center, Masonic Lodge, and a church. The building still stands tall today, preserving history in its walls.
Photo credit for above photos: ​Todd Sadowski Photography